While enjoying a drink at the bar a guy decided to try his luck with an attractive young girl sitting alone.

To his surprise, she asked him to join her for a drink and eventually asked if he’d like to come back to her place.

The pair jumped into a taxi and went back to her house.

Later, the young man pulled out a cigarette from his jeans and searched for his lighter.

Unable to find it, he asked the girl if she had one at hand.

“There might be some matches in the top drawer,” she replied.

Opening the drawer of the bedside table, he found a box of matches sitting neatly on top of a framed picture of another man.

Naturally, the guy began to worry.

“Is this your husband?” he inquired nervously.

“No, silly,” she replied, snuggling up to him.

“No, don’t be silly,” she said, nibbling away at his ear.

“Well, who is he then?” demanded the bewildered fellow.

Calmly, the girl took a match, struck it across the side of her face and replied,

“That’s me, before the operation.” 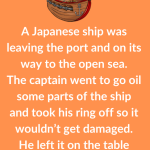