A little boy blows up a balloon and starts flicking it all around the house with his finger.

His mother tells him to stop it as he’s liable to break something, but the boy continues:

“Knock it off.” You’re going to break something.”

He stops and eventually his mum leaves for a short trip to the shops.

Johnny starts up with the balloon again after his mum has left for the store.

He gives it one last flick and it lands in the toilet where he leaves it.

His mum comes in and while putting away the grocery gets the urge, a diarrhoea run.

She can hardly make it to the toilet in time and SPLASH, out it comes.

When she’s finished, she looks down and can’t believe what she’s seeing.

She’s not sure what this big brown thing is in the toilet. She calls her doctor.

The doctor is baffled as she describes the situation, but he assures her he’ll be over shortly to examine everything.

When he arrives, she leads him to the bathroom and he gets down on his knees and takes a long hard look at the thing.

Finally, he takes out his pen and sort of touches it to see what it might be and …..POP! The balloon explodes and poop is everywhere. On him, the walls, etc.

“Doctor! Doctor! Are you all right?” She asks.

He says “I’ve been in this business for over 30 years, and this is the first time I’ve ever actually seen a fart!” 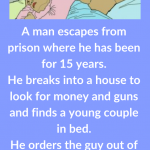 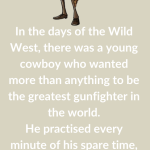