Suddenly a big burly man walks in and slaps Ray so hard that he falls off the stool.

“That was a karate chop from Korea,” says the big man proudly.

Ray sighs, gets up and brushes the dust off his clothes, sits down on the stool and continues to drink his beer.

Suddenly he gets hit so hard that he flies into the wall.

“That was a kung-fu chop from China,” chuckles the big man.

Ray had had enough. He gets up, brushes off the dust and calmly leaves the pub.

After about an hour he returns, walks up behind the big guy who is now sitting at the bar, and whacks him so hard behind his ear that he blacks out.

Ray looks at the bartender and says:

“When he gets to, why don’t you tell him that was a shovel from the hardware store in Houston.” 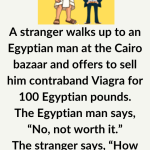 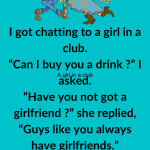