A man and his wife were on a driving holiday and looking for a hotel for the night.

When they found one the manager said, “Yes, we have vacancies, it will cost £100 each for the night.”

That was a well outside their budget, so they politely turned the offer down and asked if there was anywhere cheaper in the vicinity.

The manager replied, “Yes, in fact there is an old hotel just up the road and it’s only £25 each but, I’ll warn you now, there have been many reports of the place being haunted”.

The couple thought nothing of it and made their way to the cheaper hotel. When they arrived they paid the £25 each and, out of curiosity, asked the manager about the reported hauntings.

The manager said “Oh that’s just my rivals trying to drive me out of business. I’ve never seen any sign of a ghost in the two hundred and fifty years I’ve been here.” 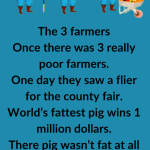