A census taker in a rural area went up to a farmhouse and knocked.

When an old woman came to the door, he asked her how many children she had and their ages.

“Hold on!” said the census taker,

“Did you get twins every time?”

“Heck no, there were hundreds of times we didn’t get nothin’.” 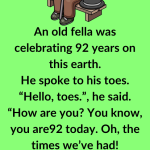