A lady finds out that she is pregnant, but she is worried.

He husband has anger management issues, yelling a lot, breaking things, really horrible to be around. She doesn’t want her kids to be like that, so she asks her doctor for advice. Her doctor says “Rub your belly once a day every day and say ‘Be polite, be polite.’ “

So she starts doing so. But as the pregnancy goes on, her husband’s attitude gets worse. Instead of supporting her he gets more angry, more often, being super rude ask the time and really stressing her out. She starts to rub her belly more and more often. Instead of once a day it becomes two times, three times, ten times, a hundred, till she is almost constantly rubbing and reciting “be polite, be polite, be polite.”

The due date arrives, no sign of the birth. A few days pass, not a contraction to be felt. Weeks turn into months, months turn into years, no baby is born. Eventually she dies at the ripe old age of 92. The medical examiner conducting her autopsy cuts open her belly and discoverers two identical middle-aged men saying “After you, ” “No, no, after you.” 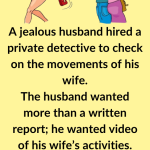