A truck driver was going down a steep incline when, at the foot of the hill, he was able to make out a couple having s*x in the middle of the road.

Five times on his descent he sounded his horn, but they didn’t move.

He finally brought the truck’ to a halt inches from them.

The truck driver got out and stormed:

“What the hell’s the matter with you two?.

Didn’t you hear me? You could have been killed!”

“Listen, I was coming, she was coming, and you were coming. You were the only one with brakes.” 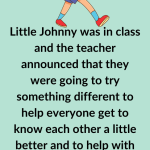