An elderly man came into a shop with a ‘Salesman Wanted’ sign in a window.

“I don’t know if this job would suit you because of your speaking impediment,” said the owner.

So the man went out & came back an hour later.

The owner was impressed, so he gave the man a dozen more Bibles & sent him out.

The man came back in two hours & said,

“This is fantastic. You sold more Bibles in three hours than anyone has sold in a week. Tell me, what do you say to the people when they come to the door?” 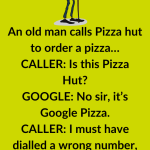 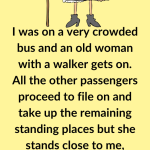