Their mother asked them where they got all that money from.

“Well, we were standing outside the brothel when a guy left,” said the 12-year-old.

We told him that we knew where he had been, so he asked us not to reveal anything and gave us 20 euros.”

“Then we followed the man,” said the other boy, “and when he came to his house we told him that now we also knew where he lived.

Then he gave us another 50 euros and begged us to keep quiet.”

“You really should be ashamed of yourselves and feel sorry for the man. Off you go to confession in the church.”

The boys did what they were told and went to the Church, to confess and atone before the priest.

After a while they came back with 100 euros, because now they also knew where the man worked!!! 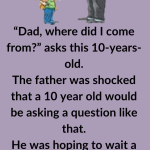