The father was shocked that a 10 year old would be asking a question like that.

He was hoping to wait a few more years before he would have to explain the facts of life, but he figured it was better a few years early than a few days too late, so, for the next two hours he explained every thing to his son.

When he got finished, he asked his son what prompted his question to which his son replied:

“I was talking to the new kid across the street and he said he came from Ohio, so I was just wondering where I came from.” 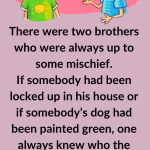