A blonde walks into a store to buy a new Television

She approaches the salesman and says “I would like to buy this TV.” The salesman says “sorry, we cannot sell you this in good faith, I don’t think you know what you’re looking for.”

Upset, the blonde storms out and thinks to herself “He won’t sell me the TV because I’m a woman and he thinks I need a man to choose for me, I’ll show him.”

She goes and buys a disguise with a short haired wig and fake mustache then later returns to the store dressed as a man. She looks around and finds her TV again and walks it over to the counter.

In her best male voice she says “Good evening sir, I would like the purchase this TV.” The salesman sees right through her disguise and says “aren’t you the blonde woman from earlier? I told you I will not sell you this.”

The blonde gets upset and storms out once more thinking to herself “So he won’t sell me the TV because I’m blonde, figures! I’m coming back and I’ll get that TV!”

She goes to a local salon and has her hair and eyebrows dyed brunette and once again returns to the store. She picks up her TV and puts it on the counter and says “I would like to purchase this television.”

The salesman slams his hands on the counter and says “Lady listen you can’t keep coming back here and trying to purchase this!”

Confused the blonde says “How did you know it was me? You saw through both disguises, are you some sort of detective?”

The salesman replies “I know it’s you because you’ve been trying to buy a microwave all day, not a goddamn TV!” 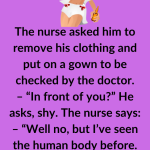 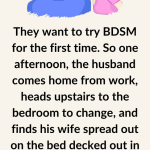